Medical and surgical interventions are ineffective. 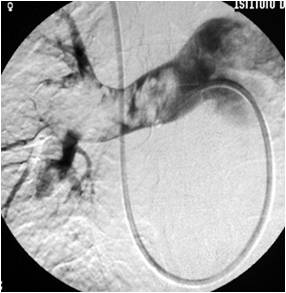 We report our experience with a hybrid treatment, involving systematic fragmentation of the embolus with an angiographic catheter associated with fibrinolytic therapy over the following days.

Diagnosis was made with computed tomography.

Inclusion criteria for the treatment were hypotension (<90 mmHg), angiographic confirmation of massive pulmonary embolism (involvement of the central pulmonary arteries),  flow diversion towards the controlateral side, mean pulmonary pressure > 35 mmHg 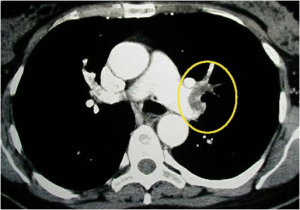 Fig . 1 – Computed tomography of the chest with pulmonary embolism on the left

The  hybrid treatment consists of a diagnostic phase  and an interventional one.

Pulmonary angiography  was  preferentially performed  with a transbrachial approach. 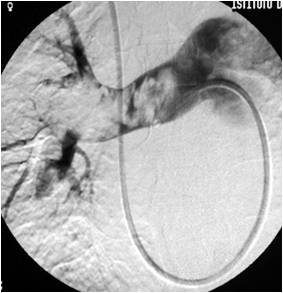 The pig-tail catheter was used  to administer the contrast medium (40ml at 20 ml/sec in the pulmonary arteries, 30 ml at 15 ml/sec in the lobar arteries).

To guide the interventional procedure. 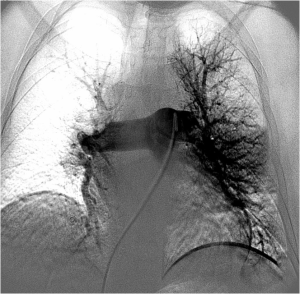 The   interventional phase  involved administration of urokinase (300.000 UI) from  the angiographic catheter.

The caudal part of the guide wire was inserted into the catheter, to about 1-2 cm over  the first angle, on order to provide the necessary stiffness to the entire device

Under direct fluoroscopy control, the angiographic catheter was rotated clockwise inside the pulmonary arteries (5-10 rotations); at the same time advanced  and withdrawn in a craniocaudal direction. 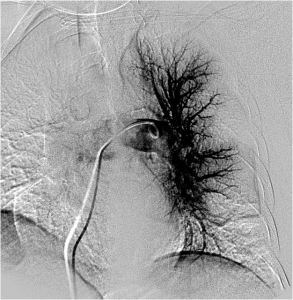 The   rotating motion was associated  with  the friction one.

Each treatment  consisted of 10  peripheral rotations; mechanical fragmentation was repeated with further cycle of ten rotations at a time, if pulmonary artery pressure failed to drop below to   30 mmHg after   the   first passage. 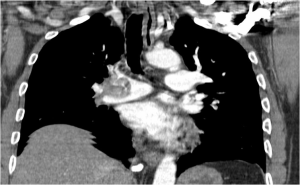 FIG. 5 – TC of the lungs with massive pulmonary embolism in the right pulmonary artery.

Immediate outcome was considered  good when mean pulmonary artery pressure  fell to 25 mmHg, after the first passage, moderate if fell to 30 mmHg, poor if fell to 35 mmHg.

In the following three days, 50.000 UI/h urokinase were administred directly  from the angiographic catheter.

Pulmonary  angiography and  hemodynamic    follow-up  were assessed ever 24 h. 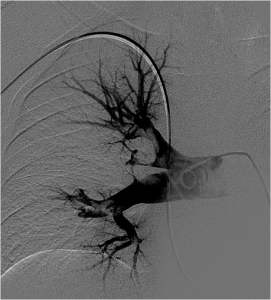 FIG. 6 – Selective angiography after the first passage of the rotating motion: the big embolus was fragmented into three prts. 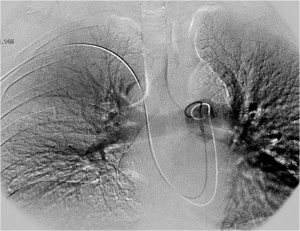 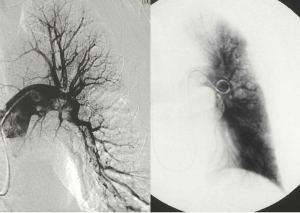 Fig 8 – I group before and after the treatment

After fragmentation and administration of fibrinolytic agent we found 4 types of haemodynamic behaviour: in 114 pts (48,6%) the mean pulmonary pressure
fell rapidly below 30 mmHg.

Fig 9 – II group before and after the treatment

in 57 pts (24,3 ) two passes were required to achieve the same result ( mean pulmonary pressure below 30 mmHg).

Fig 10 – III group before and after the treatment 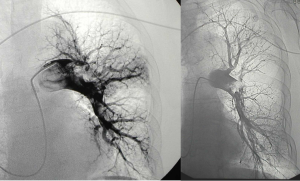 Fig 11 – IV group before and after the treatment

In the remaining patients at no time did the meanspulmonary artery fall below 35 mmHg.
The only four deads occurred in this last group.

The different results of the fragmentation can be explained with the different beahaviour of the emboli that we encountered:
with phisiologic retraction the clot loses more than 90% of its plasminogen content and becomes increasingly resistant to thrombolytic treatment.
The rapid drop in pressure values during or at the end of the mechanical fragmentation can predict the outcome of the therapy.

This simply and minimally invasive therapy is capable to produce surprising results: it enables the patient to return to normal or near normal mean pulmonary artery pressure values extrememely rapidly. 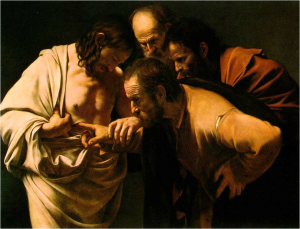